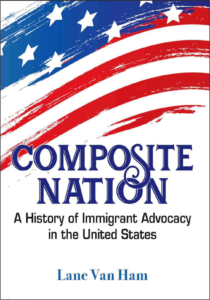 Today we talk about courageous people in the controversial arena of immigration. Immigration has come to affect more human lives today than at any time in the history of the world. According to the World Health Organization, [m]ore people are on the move now than ever before. There are an estimated 1 billion migrants in the world today of whom 258 million are international migrants and 763 million internal migrants – one in seven of the world’s population. 68 million of the world’s internal and international migrants are forcibly displaced today.

Thousands of people and organizations advocate for immigrants. Even so, the best advocates are the immigrants themselves. Our guest, Lane Van Ham, points out that immigrants are the archetype of the “strangers in a strange land.” Enormous creativity is generated by these strangers—today and throughout human history. It is the strangers, far more than the privileged in the land, who envision the world that makes space for all of us; the only world that can save life on our planet today. Immigrant advocates change systems from the bottom up. From the margins outside of borders. They force rethinking of what “border” means and how it gets used politically, racially, and religiously.

Author Lane Van Ham (http://www.lanevanhamws.com/resume) currently teaches in the writing and the applied humanities programs at the University of Arizona where he also earned his PhD. He’s written two books on the topic we’re discussing with him plus articles in professional journals.