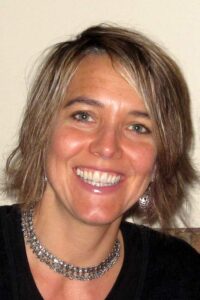 This episode of the OneEarth Simpler Living Podcast tells how religions are working together to forge new possibilities in ecology, economics, and women’s empowerment—all are making real difference in their communities. One way this cooperation is happening is through inter-religious circles formed through United Religions Initiatives (URI). Our guest, Lauren Van Ham, is URI’s Climate Action Coordinator and gives us examples from URI’s Cooperation Circles.

Lauren was born and raised beneath the big sky of the Midwest, and holds degrees from Carnegie Mellon University, Naropa University, and The Chaplaincy Institute. After completing a B.F.A. in music theatre, Lauren pursued her childhood dream of living in New York City and worked off-Broadway. In 1998 she began graduate studies in the Bay Area in psychology, creation spirituality, and interfaith worldviews. Following her ordination in 1999, and until 2007, Lauren worked as an interfaith hospital chaplain, serving St. Mary’s Medical Center in San Francisco, where she specialized in adolescent psychiatry, palliative care and bereavement support.

After her ordination to interfaith ministry in 1999, and working in healthcare for nine years, she recognized that caring for the Earth had become her deep love and declared herself an eco-chaplain. She worked for a few years as a sustainability consultant with large corporations through Saatchi and Saatchi S before becoming Dean at The Chaplaincy Institute for interfaith ministries in Berkeley, California, for nine years. Now, in addition to her work with URI, she is a guest writer for “Progressing Spirit,” an interfaith spiritual director, and serves as guest faculty for several schools in the Bay Area. Her passion for spirituality, art and Earth’s teachings construct her focus in eco-ministry, grief & loss, and sacred activism.