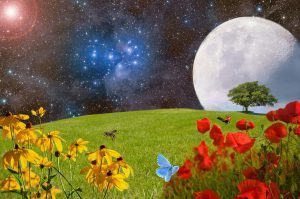 Collapse frightens, destroys. Though full of pain, death, and the unimaginable, it’s never been the last word. Five previous mass extinctions have been followed by Earth’s regeneration. Though it took hundreds of thousands of years, Earth’s regeneration of life proved stronger than collapse.

Now collapse is underway again. The experience is global and denying it only leads to further chaos. Melting icecaps and seas rising are not local experiences. Neither is deforestation, soil depletion through industrial agriculture, ballooning population, nor warming and acidification of the oceans. 2023 car sales will exceed Earth’s capacities by 400 million. 2022 fossil fuel pollutants continue rising and are scheduled to do so again in 2023. This is what collapse looks like and WE ARE LIVING IT NOW.

I find it instructive to dig into two clear examples of collapse of sectors of civilization in the Hebrew-Christian sacred texts followed by new creation.

1. The creation story of Genesis 1 (c.587BCE) came as a protest to the stories of creation supporting Babylon’s imperial civilization. Babylon’s empire had invaded Jerusalem with ruthless force (c. 587C.E.). What happened? The monarchy of Judea founded by David collapsed. The devolution was highlighted by the destruction of the Temple (Yahweh’s holy place), the destruction of Jerusalem (Yahweh’s holy city), and taking captive the educated and the leaders of Jerusalem. Off to Babylon the Judeans went. They’d thought they were exceptions to conquest, that none of this could happen because Yahweh wouldn’t let it—certainly not by the hand of an evil empire like Babylon. But then it did happen. Was God not on their side after all?

Gradually, an uneven regenerative creation followed the collapse of 587BCE. A radical re-configuration of consciousness happened for some while in Babylon. The book of Genesis was compiled and became a key component in the narrative of the Bible that contradicts the narrative of monarchy, exceptionalism, military force, enslavement, suppression of women, and dominance. That story preceded monarchies and continues to this day to be lived by many, thanks in no small part to traditional Indigenous peoples, and all who have chosen to live close to Earth in resistance to the values that mark the ways of human civilization.

2. Matthew’s and Luke’s Gospels (c.85C.E.) proclaim a new origin story. Matthew even opens with words echoing Genesis. They present stories of a Second Genesis, a story of new creation. Throughout the gospel stories, the authors show a new creation embodied in Jesus and followers. Matthew experienced this in the ekkesia (the communities of called out people, called out of empire and temple). Those communities embodied new ways of doing and being that were non-imperial. Matthew and Luke wrote around 85 C.E., after the collapse of Jerusalem in 70 C.E. by the Roman army commanded by future emperor Titus. Jewish resistance to Rome collapsed militarily, and with the destruction of Jerusalem and the Temple, the core identity of Jews collapsed along with the sacrificial regimen, priesthood, and the center of power politically, religiously, culturally. But Matthew, Luke, and the ekklesioi proclaim and live a story of new creation following that collapse.

What was going on in the faith communities where Matthew and Luke were so profoundly influenced that they wrote of a new creation? Subsequent blogs describe their experience of a new consciousness, that is, Christ or Messiah consciousness.

Image by beate bachmann from Pixabay