Population has been largely left out of the equation during the decades-long talk about climate breakdown. Nonetheless, babies keep coming. On November 15, 2022, the human population on Earth will pass 8 billion. It took millennia for human global population to get to 2.3 billion where it was in 1940 when my baby version came along. Since then, humans on Earth have multiplied 3.5 times. Nature’s disasters have kept pace; one million species are predicted by U.N. scientists to go extinct this century.

Taboo—Yet, talking about population as a cause for breakdown of life systems remains taboo, i.e., powers of civilization will not talk about it. Being committed to a MultiEarth worldview in which growth is better than contraction means more people equal growing markets. In the current worldview of the powers, growth is an irresistible fruit on the Tree of Knowledge of Good and Evil.

To be sure, causes for the extreme taboo on talking publicly about the population explosion are complex and defy single-issue solutions—the kind politicians, businesses, and activists prefer. So, avoiding this complexity and any admission that the American Dream is based on the illusion of growth and prosperity, at the expense of injustices to Earth and her species and races, is out of the question. Unpatriotic. So, our culture has pushed population deep into the shadows where it lives on and grows in the vast realm of the unconscious. There it quietly prepares for eruptions so powerful that it cannot be ignored by civilization’s powers. Even though the rapid, exponential growth of one of Earth species, Homo sapiens, belongs in every enlightened equation on climate breakdown, it’s been kept out of that equation. Now it is forcing its way in. Like it or not.

Imbalance—In my book, Blinded by Progress, I delved into population as one of five revelations that humanity continues livening an 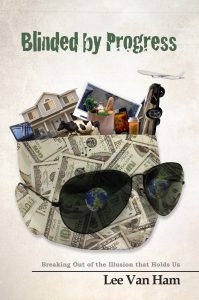 illusion—the illusion that we can live beyond the resources of our one planet. I approached population as an issue of balance. Earth, I pointed out, has tended not to tolerate growing imbalances without bringing about a rebalancing correction. Earth, taking 4.5 billion years to arrive at today, tends to move gradually. So, we humans have had ample opportunity to choose differently—to choose life shaped by natural systems of OneEarth living as a wise replacement to life shaped by civilization’s ego systems of MultiEarth living. But as humans try to negotiate with Earth instead of heeding her, her warnings are increasingly forcing the choice upon us.

Dominion—Exposed in all of this is a fatal flaw in the continuing idea that God made humans the apex of creation and gave Homo sapiens domination over all others. The Latin meaning of Homo sapiens is wise man. But wisdom has been lacking on tending creation’s evolving life systems. The flaw has been further exposed in the human understanding of “dominion” in Genesis 1:26. The word named humans as ones to consciously tend the interdependence which holds together the evolving systems of creation. Instead, dominion became domination. Genesis 1:26 became a cudgel. Humans (especially males) took it to mean control. Tending of interdependence was exchanged for declaring independence from all restrictions that did not favor them.

Changing—The tragic result is now apparent in multiple disasters. Chaos continues to grow as human powers defy God’s evolving order of interdependence throughout creation. Our species cannot manage ourselves, let alone creation. Today’s taboos hide the intentional defiance of the ruling powers. There is no will to choose differently. We are leaving it to Earth to make the correction on her terms. And the terms are revealing themselves as gradual collapse that compounds in disaster after disaster. And why? Because a single species is unable to change out of the delusion of living in MultiEarth ways. Earth has little choice, it seems, but to puncture the delusion.

The change that is now required is spiritual in nature. The egos that have designed civilization and continue to control it, must yield to the deeper, greater Divine Self in us all, a yielding that will allow creation’s processes to restore balance. The future will be OneEarth living or little life of any kind.

Note: The next blog will look at why attempts to control human population fail and what is needed to become a tender of creation’s interdependence, including Homo sapiens.