From the beginning of civilization about 12,000 years ago (10,000BCE), it has been a choice to leave a previous way of life universally embraced by Homo sapiens. That way of life took shape close to Earth and her cycles. Food was generally plentiful and could be gathered or hunted for. All that was needed was supplied. Some animals could be herded and plants tended as the people moved according to the seasons and necessities. Earth was a constant guide for living and a mystery of spiritual ritual and worship.

But around 10,000 BCE some thinking arose that this way of life could be improved. The wild could be more highly tamed—civilized so that humans had more control. Over the next centuries, this egoistic decision improved life through agriculture, trade, and simple industry. These developments allowed them to settle in one place. The improvers, or civilizers, were unaware that the idea of “improving life” carried in it the seed of its own destruction.

That phrase “improved upon” has continued to the present in the millennia since. Human egos have the hubris to believe that maybe the gifts of creation are not the best possibility. This exposes us to a core spiritual issue: Is the way of life best created and controlled by our egos, or do we switch the basis of our belief and trust to our deeper selves where connections exist to a greater wisdom and to powers beyond ego’s capacity? The “improve upon” worldview of MultiEarth living with 7+ billion humans is today exploiting Earth’s abundance beyond its capacities. Human egos show little sign of embracing a spirituality able to convert to OneEarth ways.

Speaking personally, I was shaped to be a civilizer and have taken my place in civilized society.  Historians have generally been biased in favor of civilization. Indigenous ways and people could, in the view of MultiEarthers, be improved, so traditional Indigenous living was brushed aside; the people murdered in massive genocide. Over my lifetime, I have gradually moved to embrace wildness. I am shunning the exploitation of civilizing systems, but, in truth, I continue to participate in many of them. There is no instant way out of them that I can see.

Is collapse of civilization, then, less a foe than an honest, fierce friend? It seems so.

Going back for a moment to the start of civilization, the shift from following closely the ways of Earth was not smooth. It was severely contested. The changes of implanting a new worldview were so revolutionary that it has been dubbed the Neolithic Revolution. Huge, but not sudden, it happened over several thousand years. 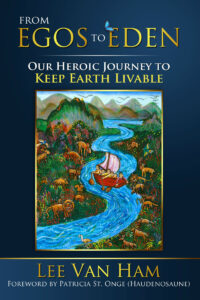 A well-known mythology that recalls that time holds that civilization was a seduction of humans away from an edenic Earth. In that myth, a serpent seduces humans to believe that a shiny forbidden fruit produced by the Tree of Knowledge of Good and Evil offered improvements on the fruit of the Tree of Life. The seduction was successful, but divine disapproval was immediate. Humans had to leave that Garden that supplied all they needed and compete with others for their living east of Eden. In a related story, an agriculturalist clashed with his brother, a herder. What made it unbearable was that God preferred the herder’s ways. So the agriculturalist murdered his brother. It takes little effort to see how in the MultiEarth worldview we compete for a living and that the MultiEarth systems are murdering OneEarth living. In the competition, the winners accumulate power and rule with systems that exploit and murder Earth and life, while survivors scramble for survival.

The truth carried by these myths for today is shocking. Civilization is based on consuming more than Earth’s capacities. It teaches scarcity of resources. So competition has created systems that divide people into some with more and some with less. The accelerating extremes of these systems are causing breakdown of societies. Collapse of societies, if not civilization itself, now seems more probable than not.

We can continue to hope that MultiEarth living can transition to OneEarth ways. But there are few signs of it. Fighting for such change, though worthwhile, has the feel of a lost cause. As apocalyptic events happen more rapidly, collapse is likely the only way that MultiEarth ways will end. A new opportunity is before us to create a OneEarth society. For all who get there, the change needed will be that of a spiritual shift that reverses the Neolithic Revolution.