My next three blogs will be about collapse. What does it feel like to be living in a time of? Is it ominous? Could it be hopeful?

Let’s delve into this huge topic by separating out three parts.

A few months ago my daughter, Lauren, began talking with me about Deep Adaptation. She told me about Jem Bendle who has co- 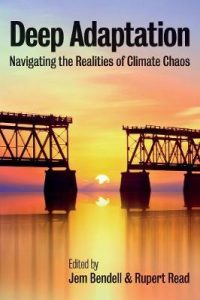 Bendle’s book introduces us to a growing community of people of various disciplines and geographies who are facing collapse rather than fleeing it.

The concept of “Deep Adaptation” purports that humanity needs to prepare for the possibility of fundamental societal collapse, as global warming and extreme weather events increasingly disrupt social, economic, and political systems. Unlike climate change adaptation, which aims to adapt societies gradually to the effects of climate change, Deep Adaptation is premised on acceptance of impending abrupt transformations of the environment. (Wikipedia)

Scientists and others are divided on their responses to deep adaptation. Some criticize it for the doomsday framing of reality. Others see it as exiting the current types of denial and delusional thinking that holds us back as we head toward 2030. Deep Adaptation thinking makes the case for reframing realistically the present so that we can make new, life-sustaining choices. Collapse could, for example, be what it takes for humans, including businesses, economics, and governments, to give up MultiEarth ways. When we look only through the lenses of MultiEarth ways, we entirely miss the beauties in the wonderful complex of choices creating OneEarth living.

When I recognized in 2010 that two different paradigms provide the lenses through which people are looking as they choose how to act and think, my own lenses became clearer. One paradigm, I saw, used far more of Earth’s resources than Earth can supply. Our society has become divided into a caste system in which a few continue to acquire far more than their share and comprise the ruling class; some have managed to acquire just enough; and most live with so little they are nearly or completely impoverished.

The other paradigm made every effort to learn from Earth. She teaches what a fair and just way of living provides. It repeatedly shows abundance for all in an Earth community of sustainable life.

After considering many names for these paradigms, I settled on MultiEarth and OneEarth. I also use the word “worldview” instead of “paradigm,” but I don’t intend anything different. Or, we can say that there are two stories to live by. One story appears sumptuous with a better life but leads to collapse; the other story reveals more and more about the abundance of being with Earth in her community of life.

These worldviews, I was learning, give the best lenses through which to read and understand sacred texts. Some texts contain stories and voices heralding MultiEarth ways. The same texts may tell counterstories—ones in resistance to MultiEarth domination. These share ways that give life.

And then I saw clearly that the Jubilee which the Bible speaks of is part of the OneEarth story, sometimes even naming it. And gradually I’ve come to see that changing stories from MultiEarth to OneEarth likely means that the MultiEarth story collapses—so strong is its grip on the powers that rule and all who enable them.