Have you noticed all the words being spoken that have not only their usual meaning but also encode other meanings? To take just one example: “western civilization.” The Bruce Benson Center for the Study of Western Civilization says…

Western civilization refers to the art, literature, culture, and enduring ideas that emerged from the eastern Mediterranean basin in the centuries before the common era, that developed in myriad forms through the Middle Ages, and that ultimately took modern shape after the Renaissance. 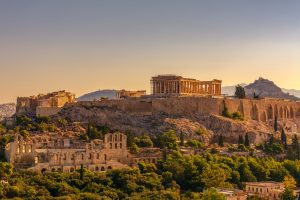 Photo of Acropolis of Athens (click photo to enlarge)

But when former President Trump said with alarm that we were in a battle to save western civilization, that’s not what he meant. He used it as code language for saving the dominance and rule of whiteness and maleness. So do many people today who angrily defend and enforce radical conservatism. They believe they are saving western civilization. But, in fact, they fear the natural evolution of human consciousness, an irreversible evolution which opens eyes to the systemic causes of racism, wealth hoarding, restricting and muting women, and destroying the environment. These are not natural nor inevitable. Humans have created these unjust systems. Once we see them for what they are, we work to replace those systems with ones that move toward greater liberty and justice for all.

But this “wokeness” upsets white and male privilege. It threatens accumulation of excessive wealth and power. It recognizes that we are part of nature, not above it. Seeing how systems that extract and dump beyond Earth’s capacities destroy Earth’s livability, we can’t help but work to replace those systems. Some religious leaders insist such change is going against God’s order and urge “getting back to God” (more code language). Too many people (mostly men) with millions and billions, with eyes closed to Nature’s evolution of human consciousness, deny it as “socialism” (another code word) and un-American. They intend to control through authoritarian power and their millions. This extreme conservatism is now the official view in the Republican organization (“party?”).

I’ve been thinking about this word “civilization.” Western civilization, brought to this country from Europe, connotes a more developed way of living than the Indigenous “savages” who lived in this vast “new” world. But the European whiteness that invaded this continent behaved far, far more savagely than native people. Settling the land was a strategy of conquest, like it is today as Israelis settle the West Bank. Settlers possess the land without paying for it, i.e., steal it.

But even taking over the land was not enough in this country. Slaves were needed to develop a robust economy. The European whites imported and enslaved black people and Asian people to build our economy.

I’ve come to believe that “western civilization” is counter to Earth’s wisdom of companionship and interdependence (democracy).  “Civilization” speaks with distrust of Earth’s wildness, warning of its dangers and insisting it needs to be tamed and controlled. But what most needs to be tamed are those who oppress peoples, declare wars, and destroy the environment. Words are a way to control. Decoding words frees.

Photo above by Constantinos Kollias on Unsplash