The oppression of women is in high gear everywhere. Currently, in the U.S. exceptional efforts are denying women control of their bodies. This oppression is being enforced by laws and upheld in courts. Those deciding are mostly men. All the while, men have a wide range of choices when it comes to decisions about their bodies—especially white men. None of them, however, has ever carried a baby in his body. And though some men have been raped and horribly abused sexually, none has had to carry a baby in 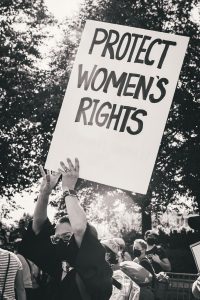 the womb as a result.

The latest poll by the Pew Research Center shows 61% of people in the U.S. believe legal abortion should be available in all or most cases. Among Democrats it’s 80%; Republicans 38%. But the minority of 39% is using legal means to force their will on the majority. How oppressive! Oppressed women cannot deliver to society their creativity; they cannot balance the patriarchal domination that is harming everyone.

The Gospel of Luke (13:10-17) tells us that Jesus healed an oppressed woman one Sabbath day at the front of the synagogue, much to the consternation and objection of the men present. She was bent over, and could not straighten up. She had been that way for 18 years! Jesus was teaching that day, saw the woman in the back, and called her to the front. He did not go to the back to where she was. That she would go to the front was itself scandalous to the men because women never went to the front of a synagogue. But, for the woman, it was liberating to hear the teacher of the day actually invite her to disregard that patriarchal, religious rule and come to him at the front.

When Jesus saw her, he called her over and said, “Woman, you are set free from your ailment.” When he laid his hands on her, immediately she stood up straight and began praising God. But the leader of the synagogue, indignant because Jesus had cured on the Sabbath, kept saying to the crowd, “There are six days on which work ought to be done; come on those days and be cured and not on the Sabbath day.” But the Lord answered him and said, “You hypocrites! Does not each of you on the Sabbath untie his ox or his donkey from the manger and lead it to water? And ought not this woman, a daughter of Abraham whom Satan bound for eighteen long years, be set free from this bondage on the Sabbath day?” When he said this, all his opponents were put to shame, and the entire crowd was rejoicing at all the wonderful things being done by him.

Notice that rather than say, “We don’t want women to be treated in this liberating way,” something they couldn’t admit, the men said their objection had to do with Sabbath rules. As Jesus rebuked them, he spoke of the woman as a daughter of Abraham—but men of the time spoke only of sons of Abraham, never daughters. And “Satan” refers to at least two causes of oppression. (1) “Satan” means “The Accuser,” and we can be sure the woman had received endless accusations throughout all of her years. (2) The rules of the Temple and the laws of Rome’s Empire held down this woman with so much downward pressure that she embodied it in her anatomy, and became bent over. Jesus personalized these systemic injustices by calling them “Satan.”

Jesus was practicing Jubilee. Today affords us many opportunities to do the same–to reenact this story, to be the hands and voice of Jesus to speak liberating words to women. It will free us all from the powers of today’s Satan.

Photo by Gayatri Malhotra on Unsplash

Church Experiences Taught Me God Is Love, But Not This
April 13, 2022